In an effort to stay at the forefront of environmental product communication, Unicycle Creative is proud to launch a new worldwide standard for eco-labeling, the Dead Polar Bear Scale (DPB)
“It’s a way for consumers to really know what they’re buying into from a climate perspective,” Says Unicycle President Lorne Craig, “We’re all killing polar bears of course… now we can use that knowledge to help adjust our buying behaviour.” 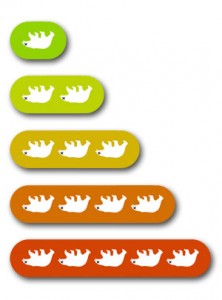 The DPB rating was developed using some of the latest intelligence on eco-labeling. A recent U.K. survey suggested that labeling information presented as plain text was much more difficult for consumers to  understand. More than half (56%) correctly identified the efficiency of a fictional new car called “Marko” when the data was shown in a colour-coded chart, compared with less than 31% when the information was presented in plain text.
As of January 2009, California and Vermont both made it mandatory that new cars sold there be labeled for climate impact. Both states use a black-and-white environmental performance label.
In the U.K., the British motor industry introduced a colour-coded label, in use at an estimated 93% of U.K. car dealerships.
“We use colours too,” Says Craig “The Five DPB rating is blood red, while the One DPB is rendered in classic eco green.”

Thanks to Sustainable Life Media for the original story thread.

This is a unique website which will require a more modern browser to work!

Enter your name and email and get the weekly newsletter... it's FREE!