On a dark, rainy November night in Vancouver’s Yaletown, lovers of beer and design gathered to raise a glass to better packaging. Appropriately, the ‘Nice Package’ invitation to this Print and a Pint event, hosted by Hemlock Printers, featured that icon of Canadian brewing, the stubby bottle.

Those of us old enough to remember dragging a case of these rotund vessels to a party may feel a swell of nostalgia. In a world of long-necked beer elegance, the stubby now looks rather like a favorite old uncle, sitting in the corner telling stories from the 70’s and smelling faintly of unfiltered Player’s tobacco. Yet this unassuming party-goer has more going for him than portly vintage charm. Efficient to transport and stack, and able to resist breakage while falling from a formica table, the humble stubby was the only single-serving bottle sold in Canada from 1961 to 1984.

But back to Print and a Pint, featuring David Walker from St. Bernadine Mission, Brian Dougherty from Celery Design and Beth Corbett from Neenah Paper. We got a look under the hood at the research-intensive process behind St. Bernadine’s Original 16 beer package design, and Celery’s efforts to make the world’s most sustainable LED light bulb package. 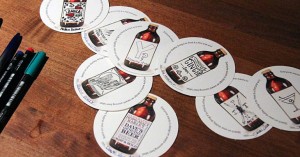 Attendees also got a chance to try their hand at designing their own beer label, as the Print and a Pint invitation (by Unicycle Creative) featured a punch-out coaster with a blank-labeled stubby bottle just waiting to be envisioned.

This was not the first homage to the short round beer bottle. Douglas Copeland featured it on the cover of his 2002 book, Souvenir of Canada, and it has made a recent local comeback with pacific Western Brewery’s Scandal Organic Ale and Lager. But its days as a sustainable standardized package are, alas, long gone.

Big Canadian breweries now mostly use a standard brown long-necked bottle, and still collect and refill them, on average, 15-20 times (according to the Brewers’ Association of Canada). Though the abundance of modern bottle designs and colours no doubt makes this less efficient than it once was. (In the U.S. most bottles are crushed, melted and re-formed, a much more energy-intensive and wasteful process, and some states still don’t have a beverage deposit and return system at all)

So can more standardized design make a comeback? Will the need for resource and energy efficiency win out over our desires for personal expression and individuality? Whatever your answer, one thing is certain. The stubby, once a sign of enforced ubiquity, has now ironically become a symbol of beer-geek uniqueness.

To find out more about Print and a Pint, visit Hemlock.com

This is a unique website which will require a more modern browser to work!

Enter your name and email and get the weekly newsletter... it's FREE!